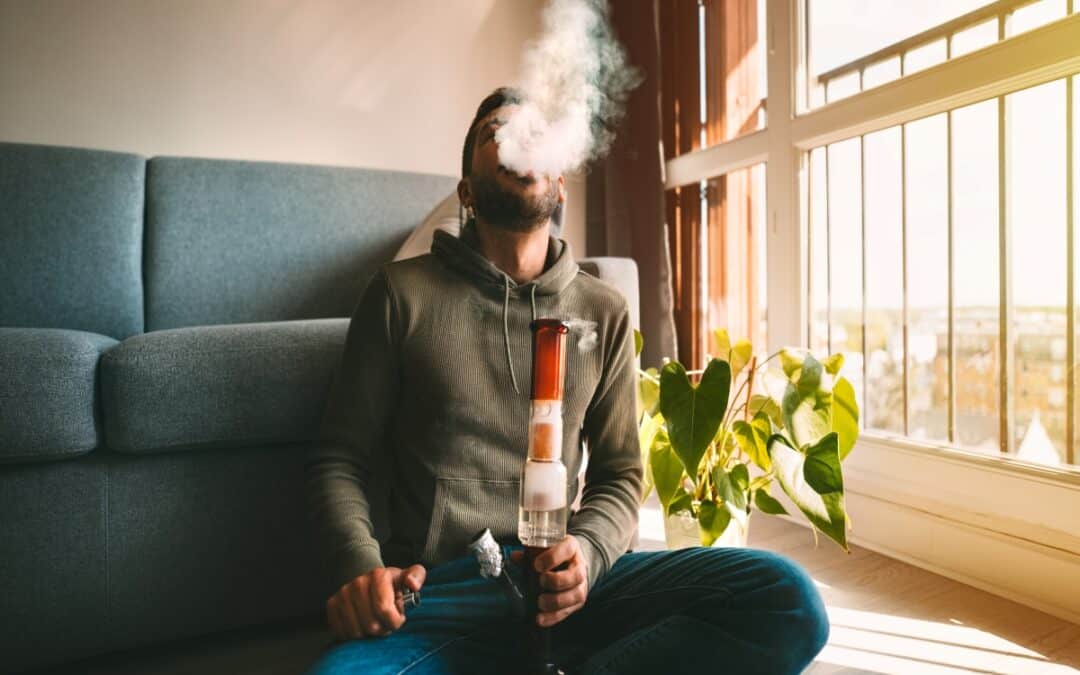 Can You Put Alcohol in a Bong?

Cannabis enthusiasts have long used bongs as they’re great for a smoother toke, and they can cool the smoke through water before inhaling. However, creative stoners have long been adding other kinds of liquids to a bong to enhance their smoking experience. But what truly occurs if you fill your bong with alcohol rather than water? Let’s find out!

Using Alcohol in a Bong

Bongs are a great way to smoke weed because water cools and filters the smoke thus it’s easier to inhale, and that gives you smooth and clean smoke. It is possible to use alcohol in a bong instead of water. However, doing so is not advised because the heat will cause any liquid to begin vaporizing.

Because alcohol is dense and does not filter smoke like water does, smoking cannabis while inhaling alcohol fumes can irritate the lungs, throat, and mucous membranes. It could also result in headaches and nausea.

Cooling down the smoke is very useful because water is able to get much colder than alcohol. Water freezes at 32 degrees Fahrenheit. Alcohol, on the other hand, needs extremely low temperatures to freeze. Your smoke will cool down considerably better if you use cold water. Moreover, if you use whiskey in your bong instead of water it can also be harsh, leave a really unpleasant flavor and you’ll feel irritated by the fumes.

What are the Effects of Inhaling Alcohol Vapor?

Alcohol vapor inhalation has consequences that are difficult to determine but it’s generally a dangerous thing to do. When you consume alcohol, your stomach and liver must metabolize the liquid before you become intoxicated. Alcohol would affect you far more quickly if you inhaled its fumes than if you drank it since it would be absorbed through your lungs.

Furthermore, alcohol that is bubbling in a bong will intensify the fumes, so every time you take a hit and start to inhale, you will also be taking in the alcohol fumes in addition to the cannabis smoke. The most common side effects when inhaling alcohol vapor include dizziness, poor muscle control, ataxia, headaches, and nausea.

The effects of each substance are intensified when alcohol and marijuana are combined. THC and ethanol, the active ingredients in cannabis and alcohol, act on the same regions of the brain that control our movement, emotions, perceptions, judgment, and reflexes. As a result, when mixing these together you will likely lose control over your actions, have impaired cognitive ability, poor coordination, slowed reflexes, reduces inhibitions, and much more.

Remember that alcohols are polar solvents, which means that they will weaken cannabis more than water by dissolving THC, terpenes, and other cannabis components. All you’ll get will be the flavor of the alcohol, which will result in losing the terpene profile and damage the overall cannabis experience.

Is it Safe to Use Alcohol in a Bong?

Ultimately, because alcohol vapor inhalation is risky, we don’t advise individuals to use alcohol in a bong when smoking weed. Note that the two substances function as opposites and practically cancel one another, making it difficult to maintain a balance between them.

Furthermore, if you’ve ever been crossfaded from combining booze and cannabis you know that it can result in a dangerous high with severe side effects. It will be challenging to balance the two substances and it can quickly ruin your day.

And, crossfading will be even riskier if you inhale alcohol along with marijuana. Generally speaking, it’s not a good idea to take them at the exact same time because it makes it harder to titrate your dose.