Among the most popular ways to use cannabis, vaporizer carts come in second, just below smoking and edibles. They’re safe when made responsibly and sold through reputable dispensaries. Unfortunately, not everyone gets their vaporizer carts that way.

In the late summer of 2019, more than 2,800 people became ill and 68 died of a lung illness that initially baffled doctors. When scientists found that more than three-quarters of victims had used vaporizer cartridges, there was an outcry about the dangers of vaping. But that wasn’t the end of the story.

Legal vape products are a ‘manufactured product’. By California law, product manufacturers are vetted, licensed, and audited by the California Department of Public Health. After further research, scientists found traces of vitamin E acetate in the lung fluid samples of those who had the disease. Vitamin E acetate is often used as a thickening agent in illegal vape cartridges. The takeaway was clear: vapers need to be more careful about where they buy.

What Is a Vape Cartridge? 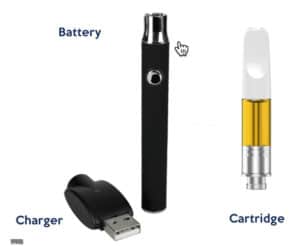 Vaping devices are often known as pens. Each pen has two parts: a battery and a cartridge. The battery powers the pen, and the cartridge contains concentrated cannabis oils. In their purest form, these have been distilled down to remove everything but the cannabinoids.

Cannabinoids have no flavor, but the flavor is one of the things people like best about vaping. Fortunately, the cannabis plant contains high concentrations of aromatic chemicals known as terpenes. To give vaping oils some flavor, many manufacturers will add the terpenes back in.
Unfortunately, some disreputable manufacturers add chemicals that are neither of those things.

What Gets Added to Illicit Vaporizer Carts?

In December of 2019, Los Angeles police seized more than 10,000 vape pens from unlicensed dispensaries. These illegal items had two disturbing commonalities: most had less THC than they said they did, and 75% had undisclosed additives.

These additives included thickening agents like vitamin E acetate as well as artificial flavors often used in e-cigarette liquid manufacturing. When added to a vaporizer cartridge, these chemicals react to one another. When inhaled, they cause irritation and inflammation, and they can stick around in the body for a long time.

When you’re shopping for vaporizer cartridges, look first at the construction of the cartridge itself. It should be made of a non-porous material such as glass, ceramic, or metal. Look for snugly fitted O-rings and well-sealed joints. These are good indicators of quality construction, and they help to prevent contamination through the air.

Ask for an ingredient list as well. What’s in your cartridge should be on this list of common safe ingredients:

Like any other cannabis product, vaporizer carts are safe when they’re responsibly made and sold. The best way to vape safely is to buy your cartridges from a licensed delivery service. These vendors are legally obligated to sell only products that are accurately labeled and third-party tested.

Dispensary Edibles: A Guide to the Best High »